Yamazaki Hiroyuki was born in Toyama.
While many artists have a point in their life when they are strongly drawn to expression and art, Yamazaki seems to have discovered expression where he ended up.

He was born and raised in Toyama but one day he was driven out of his birthplace because of OCD (obsessive-compulsive disorder), which he himself didn’t know that he had.
After moving to Tokyo he worked as a writer until his first encounter with art through Man Ray’s rayographie.

He then eventually came upon art after Duchamp. Until that point, historically speaking was that a major factor raising prices of artworks was that it was a one-of-a-kind item,
but then he experienced a “flip” of this preconception when he discovered “Warhol’s antithesis”. Warhol was successfully creating and expanding the artwork’s worth through a method of “making more” through mass production, like economic growth.

The reason why Yamazaki was so drawn to Warhol was because of the artist’s “antithesis” and “liberation”
that utilized his own negative aspects, and I believe this overlaps with Yamazaki’s driving force being his threateningly repetitive acts that derives from his OCD.
Actually, he seems to have started drawing four years ago when he initially made his work public on the Internet.

He says that this act was a simple “discharge” rather than a strategic use of the Web. In any case, this was his starting point and, subsequently, he started to receive orders of individual portraits and exhibition invitations.
Even today, the truth that he was able to sell through these exhibits remains his impetus to produce more drawings.

I am very excited about how much the general public would accept the enormous number of his works that are driven by OCD and are constructed of freely drawn lines.

[Motivation]
The purpose of my work is to alarm myself, as I am forced to live a social life like livestock without doubting typologies, stereotypes, or even faded clichés and values and yardsticks.
A work is drawn when I hear a sounding alarm.
In fact, sometimes I draw something to force an alarm to go off.

[Intention]
And for me, art and entertainment are complete opposites.
Art is “something that allows an opportunity for people to confront themselves (or the world)” And entertainment is “an escape and distraction from one to confront oneself.”
This is the discourse of philosopher Pascal. I pursue “art.”
What influenced me were Mondrian, Fontana, and Cy Twonbly — I also love Bartók and Ligeti —in particular, it was their attitudes as an artist more than their actual artworks.

[Artwork]
I use a mouse for my digital drawing. I simply use Paint, which is included in the standard bundle of Windows.
This is because I will be exposed to the most “guileless situation.”
In real life, I often use things that I find at home like pencil, charcoal, chalk, and pastel crayons.
This is because of my fundamental belief of “drawing with what you have at hand and starting (drawing) without preparation” and I think this is well entangled with my strong impetus to “avoid drawing like a drawing.”
By the way, I despise “novels that are like novels.” I also despise classical music that is like classical music.
Moreover, my drawing is intimately related to its [title].
The actual titles for most drawings are much longer, but then they will become poems so I shorten them as much as possible when I crown each drawing.

2012
Drew a picture for the first time

AWARDS
2015
The 3rd Miyamoto Saburo Biennial Sward for Original Sketch win a prize
(* There are other small awards and major graphic awards that I have omitted for irrelevance.) 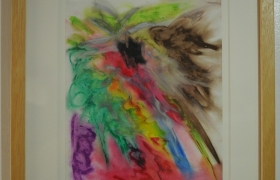 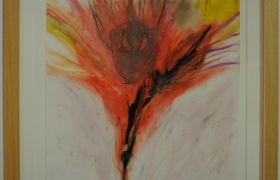 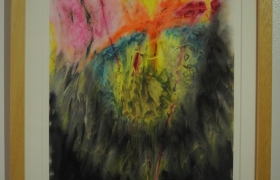 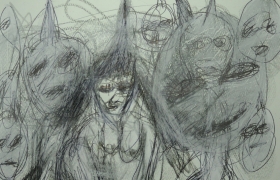 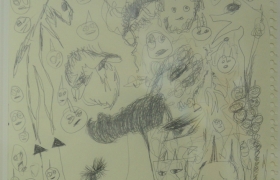 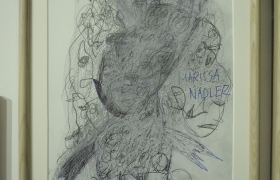 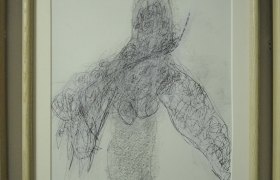